September 15, 2010
I sometimes feel like I am one of the few people that really understands Lady Gaga. To most people she’s an attention seeking pop-star, looking to make the biggest statement and attract the most attention, be it positive or negative. She’s weird, she’s eccentric, and she may even be offensive. But I think she’s using her power as one of the world’s biggest stars to send a huge, positive statement to our society.
I recently attended one of Lady Gaga’s two sold out shows in . I went to the show already a fan, but left an admirer. For one, Lady Gaga is truly a talented singer. There was no lip syncing, no singing over vocal tracks, it was all her. This is one of the most important things to me for a star such as her. I mean, yes Britney Spears may put out catchy songs and she may be a great entertainer, but her lip syncing takes away from the genuine appeal. Lady Gaga is someone that made her way to the top not by reality shows or famous families, but by learning, growing and succeeding as a true artist. 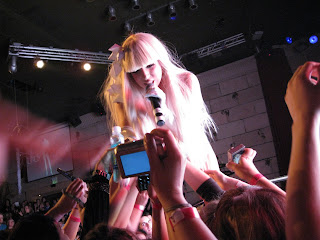 Add to the mix Gaga’s quirky personality (quirky may be a bit of an understatement). This adds more to the entertainment side and entertain she does. Her live shows resemble more of a Broadway production than a pop concert. Her shows have a theme, a story and an elaborate stage set up unlike no other to go along with. The theme of this year’s tour was the Monster Ball, in which Lady Gaga and her friends are on a troubled journey to find the said ball. They come across a few obstacles along the way with a broken down car, an interesting subway ride and one really large monster to defend. Finally in the end, the starlet makes it to her party. It was truly a whole new dimension to the live show, where very few have gone before. Not only was it about the music, but it was also about the story.
The other thing The Monster Ball Tour was all about was promoting a positive message, which is starting to show in more and more of Gaga’s antics. Since the release of her second album ‘The Fame Monster’, Gaga has been referring to her fans as ‘her little monsters’ and to herself as ‘Mother Monster’.
This goes back to her days at private school in the Upper East Side of New York City, where she was taunted and teased for being different. She told the crowd she was told she was a freak, that she wasn’t pretty enough and would never succeed.   Her message to her little monsters was to not let anyone tell them those things and to love themselves for whoever they are be it straight, gay, bisexual, transsexual, black, white, or purple. It’s an empowering message to the youth of today who are bombarded with judgement on sexual preferences and highly influenced to look, act and be a certain way. Lady Gaga is trying to change those moulds and encourage people to be themselves and do what they want to do (and that it is OK to do so), because ‘you were born this way’.
This message is spilling over to Lady Gaga’s next record, which she just announced at the 2010 MTV Video Music Awards will be called ‘Born This Way’.
And of course, what’s a conversation about Lady Gaga without talking about her fashion sense. Influenced by such people as David Bowie, the late Alexander McQueen, Donatella Versace, Freddie Mercury (Queen) and Boy George, Lady Gaga is always dressed to thrill and is a walking piece of art. Every outfit is set to make a statement. She was recently featured on the cover of Vogue Hommes wearing a meat bikini which received such negative attention from animal rights groups and vegan/vegetarians. Frankly when you think about it, an outfit made of meat is the bizzarist of bizarre. Gaga adorned another meaty piece at the 2010 MTV VMA’s when she accepted her award for Video of the Year in a full meat dress. She later appeared on Ellen DeGeneres in which she explained the reasoning behind her wardrobe choice, “Well, it is certainly no disrespect to anyone that is vegan or vegetarian. As you know, I am the most judgment-free human being on the earth. However, it has many interpretations, but for me this evening, if we don’t stand up for what we believe in and if we don’t fight for our rights, pretty soon we’re going to have as much rights as the meat on our own bones. And I am not a piece of meat.”
So while we have celebrities such as Lindsay Lohan and Britney Spears giving a bad name to fame, Gaga steps up with her efforts to bring awareness to social and societal issues, and encourage individuals to be whoever they were born to be. Not only is she a talented musician, an outstanding performer, and a fashion icon, she is an inspiration to the world, to those that don’t fit in, and to those that are misunderstood. Her ideals, although more dramatic, fit into some of my own and maybe it’s because I too have felt like I didn’t fit in, that I feel I understand Lady Gaga a little better than the average person.
by Becky
2 Comments

Song of the Moment