From Bad to Good and Good to Bad – Live Edition

A few weeks ago I found out one of my favorite bands from high school was touring with one of my least favorite bands from high school. I ranted about this for days. In the years since high school, The Used have taken a huge downturn with their music, and I am no longer a fan of their more current music, while Three Days Grace, whom I never paid much attention to, has become one of my favorite rock bands.
An hour after publishing that blog, I was invited to this show with a good friend. I was excited to see how different they have become and how they compare to each other live.

Starting off the show at Edmonton’s Rexall place was Canada’s own Default. They put on a decent set, playing a mix of their older hits and material off their newest record. Singer Dallas Smith has a great voice, but the overall sound of the band falls within the likes of other Canadian rock bands. They have yet to set themselves apart from the crowd, and are flying fairly low on my Canadian talent radar.
Following them was The Used, hailing from Utah. Not sure how the American post-hardcore band made it onto the roster between two Canadian rock bands, but I was interested to see them live again, despite not being a fan of their newer music.

They stared the show off with a few new songs of off their recently released album, which I was not familiar with. They were definitely a few steps away from the hardcore sound they started out with, and sounding more like your generic commercialized rock band.

The Used’s style has changed drastically over the years, replacing their angsty screams, with more mellow tunes and a calmer sound. For me, the appeal of the band was their raw emotion portrayed through their songs. I remember friends and me driving around town on our lunch break from school, screaming along at the top of our lungs. Their newer songs are not even worthy of me humming along to.
Following the less than stimulating new songs, the band then took a trip down rock and roll memory lane, playing a montage of songs from their very first release. This was the part of the show I was most looking forward to, but became quickly disappointed. The lead singer, Bert McCraken, can no longer sing or scream like he used to do to the fact that in his earlier years in the band, he would scream until he vomited onstage. These actions have caused noticeable and severe damage to his voice, apparent not only from the lack of screams, but from the shakiness of his voice midway through the set.

To help cover, bassist Jeph Howard has taken over Bert’s screaming parts and guitarist Quinn Alman also offers backing vocals that present no consolation.
I had high hopes that the band would play either of my favorite songs, ‘Box of Sharp Objects’ or ‘Blue and Yellow’. I was forced to slump back in my chair halfway through ‘Box of Objects’, it sounded nothing like it used to, and reinstated the fact that this is not on my list of favorite bands anymore.

I wonder if The Used was ever any good in the first place, or was it just a compliment to my angsty high school attitude. Has their sound actually changed that much, or did they always possess the over commercialized sound?

Unimpressed with the supporting acts, I was confident headliners Three Days Grace, hailing from Ontario, would make up for my disappointment.

With the release of their first studio record in 2003, Three Days Grace was another band that blended in with the current trend of rock. Their album mimicked the current release by fellow Canadians Finger Eleven, among others, and offered no distinguishable sound to set them apart.

These days they are still true to their alternative rock sound, but they have managed to write some really kick ass anthems that I can’t help rocking out to. Even their live show has evolved with their journey to rock-stardom, encorporating pyrotechnic fire balls to compliment the fierce attitude.
The rocking out began immediately as the band opened with their two singles from their recently released album “Life Starts Now”, before moving to some of their older songs.

Singer Adam Gontier offered a few words of thanks to the fans who have supported them and offered thoughts to the band after a family emergency earlier in the month, which forced them to cancel a number of shows in British Columbia. To those people who had nothing but complaints and ill words for the bands action, Adam says he hopes they never come to another Three Days Grace show or buy another Three Days Grace record. He then somberly dedicated the next song, ‘World So Cold’ to the woman in his life that was recently lost.

Halfway through the set the band took a break for Neil Sanderson’s drum solo. To me, no drum solo will ever compare to the epic-ness of Travis Barker’s solo during the recent Blink 182 tour this summer.
Following the solo, Adam reappeared behind the crowd by the sound booth, giving the people at the back an up-close view while singing an Apocalyptica cover before making his way back to the front of the stage. I can always appreciate a little bit of crowd interaction during a show.

They ended the set with one of my favorite tracks ‘Riot’, which left the rowdy crowd craving another taste. We were treated to three more songs for the encore, including ‘Animal I Have Become’, from the bands second studio release “One-X”.

While I found no value in the opening bands, I walked away entertained after Three Days Grace. They are your typical rock band, but they do it well. 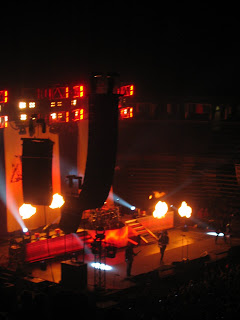 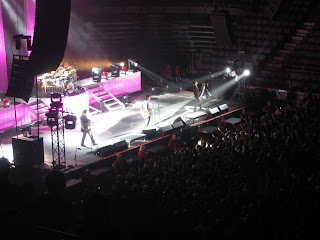 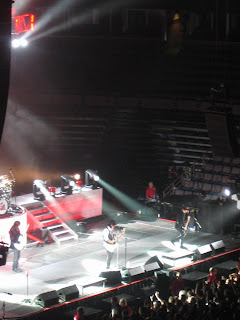 End of an Era (and a guest post too!)